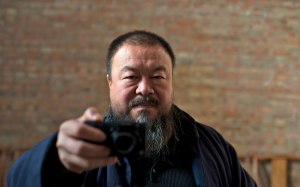 There’s a lot to like about Chinese artist Ai Weiwei. The celebrated artist and dissident has made a career out of flipping the bird and saying “Fuck You, Motherland” to China. With every tweet, blog post, sculpture, art installation, video, and book, he becomes a bigger and more beloved cultural and political icon. A playful and outspoken figure, Ai Weiwei has sometimes been hailed as the Andy Warhol of China–a bearded, pot-bellied, mischievously happy Warhol. The artist who helped design the Beijing National Stadium, or Bird’s Nest, for the 2008 Summer Olympics (and then denounced it for its pomp) is as memorable a figure as any Shakespearean character. And never is he so riveting as when he is pulling the tail of his motherland, China.

Alison Klayman’s documentary, Ai Weiwei: Never Sorry, does not disappoint. You watch, fascinated, as Ai collects the names of thousands of schoolchildren, who died during a 2008 Sichuan earthquake because of shoddy “tofu” construction. Later at the Haus der Kunst museum in Munich,  he constructs a sculpture of 9,000 backpacks in their memory, in protest of the government cover-up. At the installation of “Sunflower Seeds” at the Tate Modern in London, he pours 100 million hand-painted porcelain sunflower seeds, keeping a reserve of 10,000 seeds, just in case any museum visitor should decide to slip a few seeds into their pockets for souvenirs.

Ai Weiwei takes a special glee in standing up to the tyranny of China and ridiculing its absurdities. Indeed, there are moments the cheeky heroism of his activism outshines his art. When policemen videotape his every move, he shoots back—literally, with his own videographers in tow. Clearly this is a man who knows how to get attention, and grab hold of the public consciousness.

Yes, Ai Weiwei has a hooligan side that’s hugely appealing in its defiance. As he tweets on his Twitter page, “There are no outdoor sports as graceful as throwing stones at a dictatorship.” The film also documents such poignant moments as his family’s history during the Cultural Revolution, the 12 years he spent as an artist in New York City, and his unexpected fatherhood in his 50s.

First-time documentary filmmaker Allison Klayman has struck gold with her documentary, which is at turns humorous, graceful, and sobering. With more than 300 hours of footage shot over two years, Klayman faced the daunting task of shooting this one-man David vs. Goliath drama as it was unfolding. She manages to pull off the near-impossible, delivering an intimate, endearing portrait of a man who lives under the watchful eye of a totalitarian government. At times, Ai seems almost American in his doggedness, as he speaks out against censorship and demands greater transparency.

Tonight IFC Films is hosting an afterparty for Ai Weiwei: Never Sorry at the caviar and vodka bar, Pravda. It’s a shame that the subject of the documentary could not be there himself to hold court at one of the underground tables. (Currently he is not allowed to travel outside the country and his blog has been shut down.) To Ai then, I raise a glass and make a toast in his honor: History is indeed delicious when you serve it up yourself. 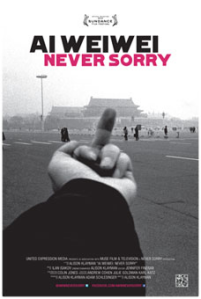